In order to fully discern what benefit this compound may have for you, we must first understand the nature of the “beast” so that you have a better fundamental knowledge of how it’s going to operate within your system.

We’ll initially assess its molecular structure before moving onto the history of the compound, and later on, examine the administration principles / tips for using it as effectively as possible.

On the surface, masteron is a highly unremarkable compound. We say unremarkable purely because it is yet another DHT (dihydrotestosterone) derivative steroid, thus making it part of an already fairly large “family” of compounds.

DHT itself is an interesting substance, and through understanding how it functions, we begin to understand the potential on offer by the “offspring” steroids moulded in its resemblance, including this one.

DHT is considered by many to be the primary androgenic hormone. Androgenic hormones are ultimately responsible for making all the “parts” of a man’s manifest that go into making him a man.

This includes hair growth on the face and body, masculinisation of the face, testicular hypertrophy and deepening of the voice. In fact, without DHT being in place, it is thought that the male puberty process could not begin. Between 5 – 10% of all free testosterone is converted into DHT. Once converted, this DHT then gets sent to the areas of the body where it is needed in order to help the body fulfil its “optimum” functionality.

Whilst we know a reasonable amount about DHT, we still do not know near enough in regards to precisely how and why it triggers the puberty process in both the male and female bodies (with women, it is thought to be responsible for pubic hair growth / the development of the body after puberty as can be observed in the previous article.)

What we do know however, is that it is three to ten times stronger than testosterone. As a result, it’s fairly obvious that this substance is something we want a little “more” of in our lives.

The problem is, that in order to access DHT in an anabolic capacity (in regards to muscle growth and repair), it probably stands to reason that it’ll need to enter the muscle cells. This is fine in theory, but in practice, it really isn’t quite that simple.

Contained within the muscle cells is a hormone known as the “3-hydroxysteroid dehydrogenase enzyme” – this enzyme actually breaks down any DHT that manages to enter the muscle cells.

This is because testosterone is largely regarded as being the primary anabolic agent necessary to establish muscle growth and repair. The body “understands” that DHT is important for growth, but it chooses to allocate it to the processes previously mentioned. However, when we concern ourselves with the structure of DHT itself, we can choose to infuse it as a means of protection against the 3-hydroxysteroid enzyme.

This is precisely what has taken place with masteron in order to allow it (DHT) to survive and function within the muscle cells. Specifically, this alteration comes in the form of a methyl group (a carbon atom surrounded by three hydrogen atoms) being attached to the carbon two position of the DHT molecule. It is this addition that not only serves to protect the molecule from breakdown, but also gives masteron its strength. Without going into elaborate detail, hydrogen is used as a means of “boosting” any molecule it is attached to (it is used in rocket fuel, after all.)

In this instance, it greatly enhances the anabolism of the base DHT compound, and being that the DHT compound itself no longer represents the original “target” blueprint for the 3-hydroxysteroid enzyme, it can infiltrate the muscle cells unnoticed. As a result, we’re then left with a functional compound that is able to produce anabolic results similar to testosterone. Some would say weaker, but others would actually compare the mass retention / progressive evolution potential to that of deca. 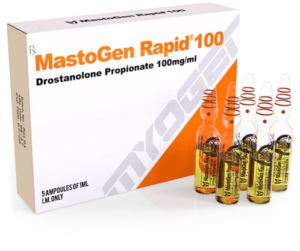 Regardless of your train of thought, it would be fair and rational to state that it is at least the same and potentially less potent by a few percentiles difference in this regard (when compared to testosterone) if we are to verge on the “safe side”. With this in mind, why not simply use testosterone instead? If it was as simple as anabolism properties only, then people probably would. This is why we must swiftly move onto the following point of interest:

It’s not necessarily the anabolic properties of masteron that many users would choose to use it for – it possesses other highly desirable traits that ultimately allow it to distinguish itself as one of the most effective cutting compounds ever released. One of the common issues relating to anabolic efficiency during any anabolic steroid phase is that of SHBG (Sex Hormone Binding Globulin) and its ability to reduce androgenic activity. This is largely because it binds to 60 – 70% of the body’s “free” testosterone.

When we are assessing anabolic activity (and capacity) within the body, it is actually our “free” testosterone levels that enhance our ability to develop lean muscle mass in general. One of the common positive traits of DHT derivative steroids is that they actually bind to SHBG – they do this more potently than testosterone does, thus leading to the enhanced circulation of free testosterone within the body.

They also bind to androgen receptors more potently than testosterone – this leads to a surge in androgenic activity (as a result of the receptors having a more stable platform to “stand” and operate on). In turn, this surge leads to an androgenic “reign” within the body, whereas estrogen levels lower significantly in comparison.

This makes estrogenic side effects whilst taking masteron almost if not completely impossible. Not only that, but this product actually serves as an effective anti estrogen agent in its own right due to its unique “traits”. If that’s not enough to grab your interest, then another benefit of high levels of androgen is that lipolysis is positively spiked. This means that your fat burning potential increases.

The Other Benefits of Masteron

Now, considering all of the previously mentioned elements in regards to general anabolism and the release of free testosterone in conjunction with respectably strong anti estrogenic and fat burning properties, we then need to consider what we are left with:

All of the above elements combined are what ultimately give us the masteron steroid. It can drastically improve your appearance when used as part of a cutting cycle (though you’ll need to carry a low level of body fat, i.e. 10% or below ideally to capitalise on the “dryness” it affords its users), and will ultimately improve the effectiveness of any other compounds it is combined with.

That’s without mentioning its ability to enhance fat burning, strength potential and lean tissue protection. In many ways, it could be argued that a cutting cycle wouldn’t be fully “complete” without it (especially during the latter phase of an advanced / professional stack for an aesthetic competitor), but that is of course open to individual interpretation and very goal dependant.